Order now and we will ship your skateboard by air

About the Bamboo AT

Bamboo AT use Fiberglass Bamboo double-drop deck and flexible battery enclosure. So you will have more stable and comfortable riding experience. Beside high-quality materials, we also focused on high-quality & well-working parts for the electronics such as the customized Hobbywing ESC with 3 speed modes & a sensor for smooth braking & acceleration, which offers you a safer and enjoyable ride on your electric skateboard. Furthermore, the ergonomic Remote is also a customized version of Hobbywing which gives you outstanding control feeling so that you get merged with your eSkateboard. The Bamboo AT comes with huge motors unified in a dual belt driving system and a big 14 Ah Sanyo lithium ion battery for long ranges up to 30 km. For the wheels, we used elastic Honeycomb Tires 6" (150 mm) with solid rubber, so they give suspension comfort as well as enough stability to you and your electric skateboard. They also give you the advantage of riding on any terrain, even if there is mud, bricks or high grass. Compared to air tires you never have to check the pressure on them & never have to worry about any sharp objects on the way. Because of their hardness, they also work pretty well for drifts and slides. All these features won't be that enjoyable without the double King Pin axles with proper bushings & a suitable truck length. We tried different types of parts & suppliers until we found the solutions with the best results.


Specification of the Bamboo AT It comes with bigger hole in battery cover for socket for recharging and they decided its good idea to repair it with silicone. It looks terrible and qualificate to repair. Poor quality control

A great product of course! I heard rumors of battery issues and I've yet to run into any.

But seriously when can we expect a 12s battery to push these boards even further?

Placed the online for the Ownboard Carbon with 120mm cloud wheels. Received my delivery within 33 days which was much after than expected.

The board is a dream and very smooth to ride. Highly recommended!! Thank you Ownboard 👍🏼

J
J.P.
Great board all-around, especially for the price.

I decided on the Bamboo AT after a lot of deliberation between the Evolve Bamboo GTR and the Ranger Backfire X2. Initially, I wrote Ownboard off because I had heard of A LOT of battery issues plus bad customer service etc.. But in early 2020, they claimed to have fixed the battery issue, so I caved and bought one, and I’m glad I did. I’m going to start with my issues before I mention what I like about the board. After about 5 hours on the board, one of the motors started stalling when I would accelerate from a stop. The quick fix was just to kick before accelerating so that the motor could have a head start, and it worked OKAY that way. Not perfectly. The brakes and overall torque were suffering. I emailed ownboard about it immediately, and they sent me a new ESC for free. It got here surprisingly fast (I’m in the United States). The problem (now obvious to me) was not the ESC, but the motor. When I again emailed them, they responded the next day and requested $25.00 for shipping for the new motor. IMO, you shouldn’t have to pay if the board is under warranty, but oh well, it’s $25. Motor took 2.5 weeks to get here, I just installed it today, and the board is running perfect. Overall, the customer service was good. They answered my emails quickly, and got me my parts quickly as well.
One problem I ran into, was that they almost completely lack any sort of instruction on how to work on the boards. Luckily, it’s pretty intuitive and not over complicated. But I still found myself checking Evolve’s very detailed and thorough YouTube channel for How-to videos. Being a Chinese company with many English-speaking customers, they need to do a better job explaining the functions of their product through their manual and/or social media. (@Ownboard, if you need an English-speaking representative to make videos/write an instruction manual, I’d be more than happy to).
Anyway, the Bamboo AT rides like a dream. When it is working properly, it is every bit the Evolve killer it was meant to be. It is noticeably faster than the Evolve at top speed, and the deck is much more flexible (which adds to the fun factor). I ride on the honeycomb wheels, which are a great option if you ride where there are going to be thorns or other things to pierce your tires. The honeycombs are pretty squishy, and absorb small bumps like a dream. You CAN power-slide on concrete with these. Though they take away slightly from the range, and I’ve heard they lessen the top speed slightly. For me, they’re worth it, and they’re great tires.
The double kingpin trucks are fantastic, but slightly loose from the factory. Give the board a quick test ride and you’ll know that you should tighten the bushings up, or get harder ones. This will make speed-wobbles much less frequent.
When I was trying to decide which board to buy, one of the things that bothered me were the reviews that said that the Bamboo AT did not have the acceleration rate of the Evolve GTR. This is accurate, but almost insignificant. Unless you ride many different E-skates every single day, you will not be disappointed by any means with the Bamboo AT’s power output. It accelerates like a Tesla, so brace yourself.
This board is crazy fun, and I’d recommend it to anyone despite Ownboard’s few flaws.

So far I have clocked about 70km on my Bamboo GT with the cloud wheels. It has performed flawlessly. If I had one wish it would be for some harder bushings because Im a heavier rider but Im impressed with the quality of this board for the price. Having loads of fun and very happy with my purchase 😎 Dave from Aus 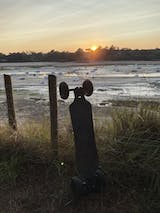 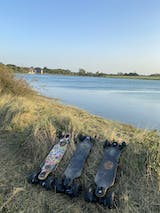